[Update: This system is now complete and working. See details at http://noisymime.org/blog/2009/05/rallyduino-lives/]

So recently I’ve started playing slightly more seriously with my Arduino, I’ve even gone so far as having a plan on what the hell to do with it. For some time I’ve wanted to try my hand at putting together a homemade Rally computer and the Arduino seems to almost be the perfect platform for this (Though not without one or two shortcomings). For those not familiar with them, a rally computer in its most basic form is essentially just a glorified odometer, in other words, it measures the distance your car has gone. Very briefly the differences are:

If you want to lookup existing rally computers, I recommend you checkout manufacturer websites such as Brantz and Terratrip.

So why make your own when there’s already such good existing products? Well I can give you 3 reasons: price, openess and fun. All the units currently on the market are quite expensive ($500+) and are all very much proprietory, closed systems. My goal is to put something together than costs about $200 and is as open as possible.

Do demo what I’ve got going so far, checkout the video below: 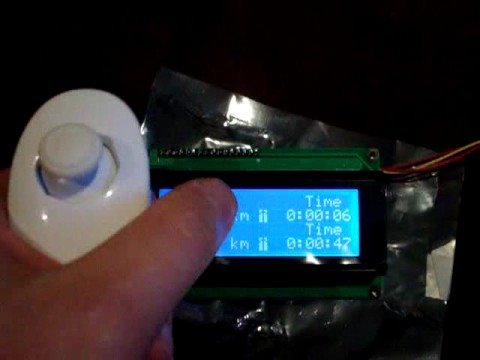 So as you can see, the system is up and running with all the basic functionality. I need a few extra pieces of hardware (Case, power regulator and prototyping shield), before I give it a test in a real world scenario, but at the moment I’m confident things should work OK. The biggest problem I’m having at the moment is the responsiveness of the Wii nunchuck as a controller. It works OK in tests, but when you get the Arduino processing the input pulses (At around 150Hz) things start to slow down. Obviously priority is given in the following order:
Pulse Counting->Speed/Distances Calculations->Screen Updates->Nunchuck input

That’s about all for now. I’ll probably post about this again after I’ve done a real world test on a car so it will have to wait until the extra bits and pieces arive. The source code isn’t yet available (Simply because I don’t think there’d be much interest), but if anyone would like to see it, just leave a comment and let me know.